The realism of Discrete Fracture Network (DFN) models relies on the spatial organization of fractures, which is not issued by purely stochastic DFN models. In this study, we introduce correlations between fractures by enhancing the genetic model (UFM) of Davy et al. [1] based on simplified concepts of nucleation, growth and arrest with hierarchical rules. To do so, the nucleation of new fractures is correlated with the elastic strain energy of distortion stored in the matrix, which is a function of preexisting fractures. Discrete Fracture Networks so generated show multi-scale clustering effects with fractal dimensions below the topological dimension over a broad range of scales. The fractal dimension depends on the way one correlates the nucleation occurrence to the strain energy. Fracture clustering entails a spatial variability of the fracture density, which increases with the intensity of the coupling between stress and nucleation. The analysis of connected clusters density and of fracture intersections also highlights the differences between the UFM models and its equivalent Poisson model. We show that our stress-dependent nucleation model introduces some new fracture size-positions correlations, with small fractures tending to connect to the largest ones. 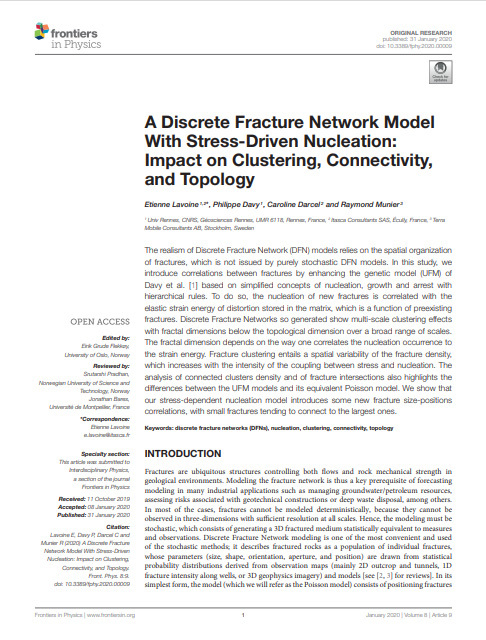