The purpose of the study was to provide technical support to the blasting area of an open pit mine. To carry it out, numerical blasting modeling was performed using the Blo-Up software, developed by Itasca in the context of the Hybrid Stress Blasting Model project (HSBM, 2001 - Present) of which Itasca is a participant.

The problem analyzed is related to the non-conformity of the design berms observed in the mine and the need to understand the relative contribution of the structural condition of the rock mass and the design of the blasts to the final situation of the affected benches.

In addition, Itasca provided high-level reviews by several International Principals of the company, who provided independent visions of the geomechanical condition of the rock masses.

Itasca's role was to act as a specialist consultant in numerical modeling of the blasting process, also contributing with the geomechanical vision of the potential behavior of the rock mass involved in the blasting damage assessment.

The model of the slope of interest was constructed through the successive simulation of the blasting into four simple benches (submodels). From each stage, the emerging damage information is obtained and exported to the next model and in this way both the final slope geometry and the extent of blast induced damage can be obtained. The objective was to diagnose the phenomena that controlled the non-conformity of the design lines from both the blasting and the geomechanics side.

Relevant results indicated that it is advisable to modify the designs to limit the extent of vertical damage. Although in the Blo-Up model the induced damage was observed to be relatively constant, the fracturing shows variations of up to 1 m in its vertical extension. The maximum operationally admissible negative subdrill should be studied, especially in rows close to the crest of the next bench, to reduce vertical damage. In the simulations performed, the geological structures present in the rock mass showed a preferential conduction of the damage and fracturing, resulting in a better representation of the geometry. It was also recommended to try and reduce the magnitude of horizontal damage via adjustments to the design. 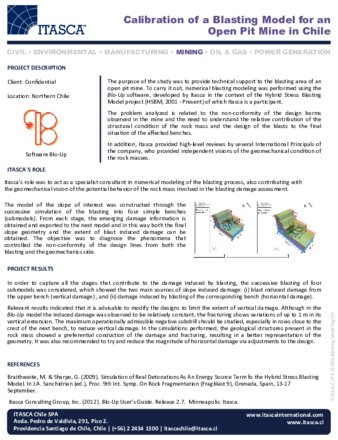