A major use of DFN models for industrial applications is to evaluate permeability and flow structure in hardrock aquifers from geological observations of fracture networks. The relationship between the statistical fracture density distributions and permeability has been extensively studied, but there has been little interest in the spatial structure of DFN models, which is generally assumed to be spatially random (i.e., Poisson). In this paper, we compare the predictions of Poisson DFNs to new DFN models where fractures result from a growth process defined by simplified kinematic rules for nucleation, growth, and fracture arrest. This so‐called “kinematic fracture model” is characterized by a large proportion of T intersections, and a smaller number of intersections per fracture. Several kinematic models were tested and compared with Poisson DFN models with the same density, length, and orientation distributions. Connectivity, permeability, and flow distribution were calculated for 3‐D networks with a self‐similar power law fracture length distribution. For the same statistical properties in orientation and density, the permeability is systematically and significantly smaller by a factor of 1.5–10 for kinematic than for Poisson models. In both cases, the permeability is well described by a linear relationship with the areal density P32, but the threshold of kinematic models is 50% larger than of Poisson models. Flow channeling is also enhanced in kinematic DFN models. This analysis demonstrates the importance of choosing an appropriate DFN organization for predicting flow properties from fracture network parameters. 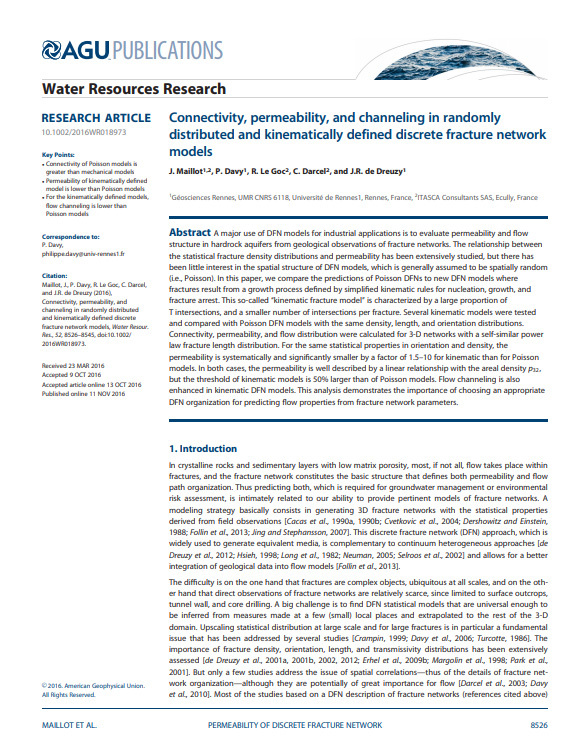