Thermal and dynamic analysis of the main dam of a water reservoir in a river in southern Chile.

Due to the temperature increase that occurs during the cement hydration process in RCC type dams, together with the low conductivity of the concrete, significant thermal gradients can be induced between the inner mass and the outer surface of the dam. In conjunction with the external boundary conditions, plus daily cooling and heating cycles, and mechanical restrictions on the foundations, significant stresses can be induced, leading to cracking in a structure designed to be watertight.

Additionally, as usual in Chile, it is necessary to guarantee the dynamic stability of the dam through a formal dynamic analysis. The study considered a single analysis earthquake (the maximum credible earthquake) artificially defined by a third party based on a study of the seismic risk for the reservoir site area.

Itasca performed three types of analysis: thermo-mechanical coupled analysis to determine both stresses and maximum temperature gradients observed during the heat generation and dissipation process in the dam; static analysis that corresponds to a mechanical analysis where only static loads are considered; and dynamic analysis where the dynamic stability of the structure was evaluated against an extreme seismic loading condition. The stability of the structure is determined according to the values of the remaining displacements induced by the earthquake and the maximum stresses observed in construction. These analyzes were developed considering the reservoir at its maximum filling level and under various analysis conditions in terms of the operation of the drainage system.

The stresses generated during the dynamic loading, located the most unfavorable results in the upstream side of the dam, although with low magnitude compression values. The greatest tensile stresses are observed in the downstream side. The compression values ​​are slightly higher for the thermo-mechanical solution with the drains operating normally, the extreme values ​​being located on the foundation of the wall. The thermo-mechanical solution also produces the highest tensile values. From the point of view of the displacements, the largest values observed in the modeling corresponded to the central sector of the dam which contained a special joint to accommodate the design to a geological fault identified in the foundation. The relative displacement between segments is reasonably greater for the block containing the special joint, which represents a steel / steel type contact instead of the concrete / concrete type contact associated with the rest of the construction joints. According to the constitutive models and parameters used to simulate the behavior of concrete, it was observed that the structure remains within the elastic range of deformations. 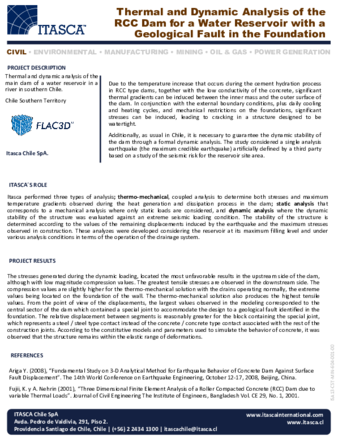